A small stove with a big impact

Since January 1, 2020, FUCHS has been a carbon-neutral company. As the group is unable to avoid all emissions, it compensates the remaining carbon emissions by purchasing climate certificates, contributing to sustainable development at various locations around the globe. Here's an example from Uganda.

Sarah Nabayego fans herself with her hand yet the beads of sweat are still competing for position on her brow. The Ugandan has her hair wrapped in a blue cloth and she wears another around her waist. It is hot in her hut on the outskirts of Kampala. A fire blazes in one corner. The smoke it gives off has long stained the corrugated tin roof above the fireplace black and the top layer is peeling away in places. Several containers balanced precariously on burning hunks of wood and improvised fire surrounds hold the bubbling food.

Juliet Namirrimu is also preparing to cook. She sits comfortably in a dark blue plastic chair on her porch. Between her and the wall of the house stands a round, gray, slightly battered stove; on the balustrade, a large bowl of rice sits waiting. As people stroll by on the street, a red glow begins to appear beneath the carefully layered charcoal in the stove. Here and there, small flames lick up between the black lumps of coal – without smoke, without soot, without extreme heat. More on this later. 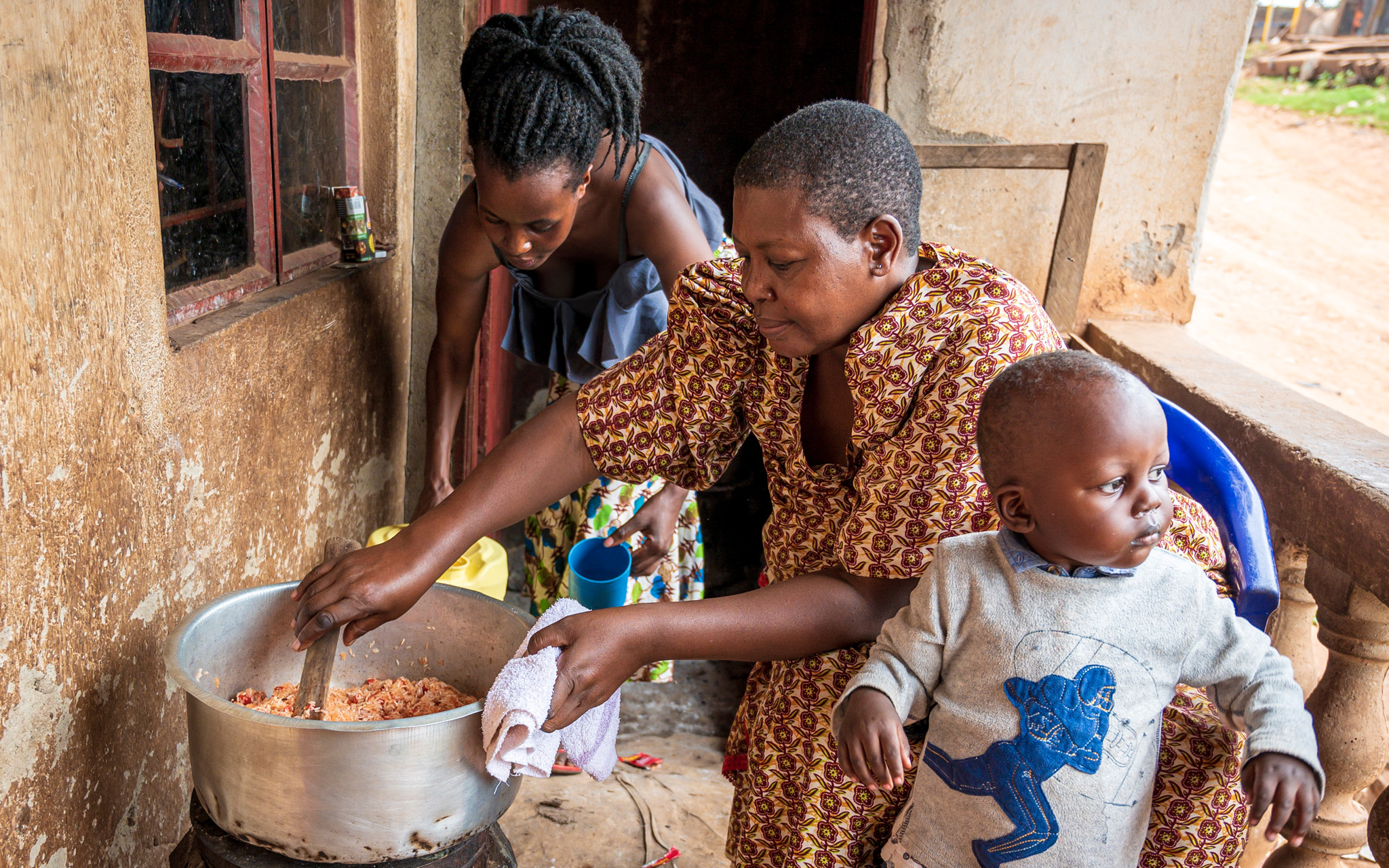 Juliet Namirrimu cooks for ten people every day and values the many advantages of the efficient cooking stove.

The pearl that is Uganda is losing its sheen

Uganda lies in the east of Africa, right on the equator. Many natural wonders make the country something quite special within Africa. Even though the interior around Lake Victoria is still able to draw visitors with its enchanting landscape, decades of civil war and climate change have long left their mark on the population and nature.

In the United Nations' Human Development Index, Uganda stood at place 159 of 189 in 2019. In the capital Kampala alone, a metropolis estimated to house more than two million inhabitants, many people live in slums with insufficient infrastructure. What is more, Uganda suffers badly from the problem of deforestation. In the past ten years, the country has lost 50 percent of its woodland, which leads to erosion and water supply problems, as well as other issues. The main reasons for the forest clearances include the high demand for wood, which is still the most important source of energy in many households.

Place 159 of 189 is where Uganda stands in the current Human Development Index by the United Nations. This puts the country level with Tanzania between Nigeria and Mauretania.

This is precisely where an initiative by the carbon offsetting service provider First Climate comes in, which FUCHS helps to finance through the purchase of climate certificates. "With energy-efficient cooking stoves, we not only help the population to save fuel and their scant money, but also reduce deforestation of local woodland and carbon emissions. In addition, our project is beneficial to health and boosts the local economy," explains Dr. Jochen Gassner, CEO of First Climate. As one of the largest climate protection projects in East Africa, the Gold Standard project (see info box) achieved savings of more than 500,000 tons of CO2 in 2019 alone.

In 2006, the carbon offsetting service provider First Climate and the project developer Impact Carbon began a project to promote the spread of energy-efficient cooking stoves in Uganda. The value is created entirely locally in Uganda, as the cooking stoves are produced and distributed by local companies in Kampala. Because the project is of such high environmental, social, and economic added value, it is certified with the Gold Standard, which is essentially based on the regulations of the Kyoto Protocol for calculating CO₂ savings and is issued by the Gold Standard Foundation based in Geneva. There are currently around 520,000 stoves from the project in use in and around Kampala, which saved more than 500,000 tons of CO₂ in 2019 alone. The aim of the project partners is to further distribute the efficient stoves in urban areas. What is more, the infrastructure set up for the project could also be used to distribute other sustainable products such as water filters or solar systems. 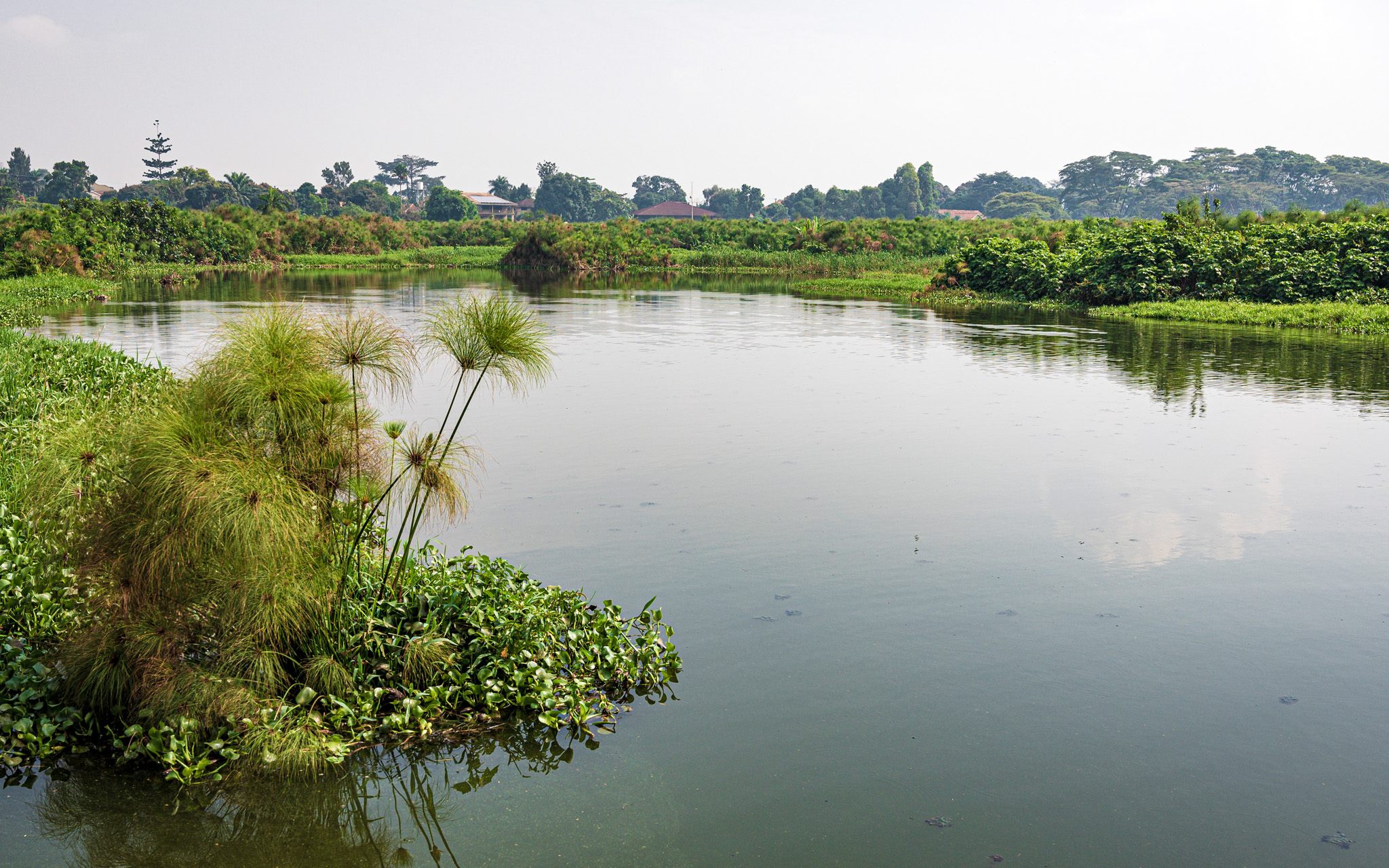 Uganda has lost around 50 percent of its woodland over the last ten years.

Onions and tomatoes are already sizzling in Juliet Namirrimu's dented cooking pot, releasing an aromatic scent. "I've been using this stove for twelve years and it still works," says the mother of several children, who cooks for ten people every day in her household. "This stove saves me a lot of charcoal and a lot of money, which I can use to buy other things. And the food is ready quicker." She tears open a small bag of light brown liquid and adds it to the vegetables. The pot hisses and steams. The puffy sleeves of her floral dress wave as she reaches quickly for the cooking spoon and stirs the food.

The new stoves are so efficient due to what is known as the chimney effect, a simple and well-known technology. While traditional stoves are unable to fully convert wood and charcoal into heat energy, in the well insulated cooking stove the hot rising gases draw fresh air into the combustion chamber through a flap. The additional oxygen increases the temperature, which causes the coal to burn more efficiently – and cleanly, as the traditional method of cooking produces not only a lot of soot, but also the poisonous gas carbon monoxide. 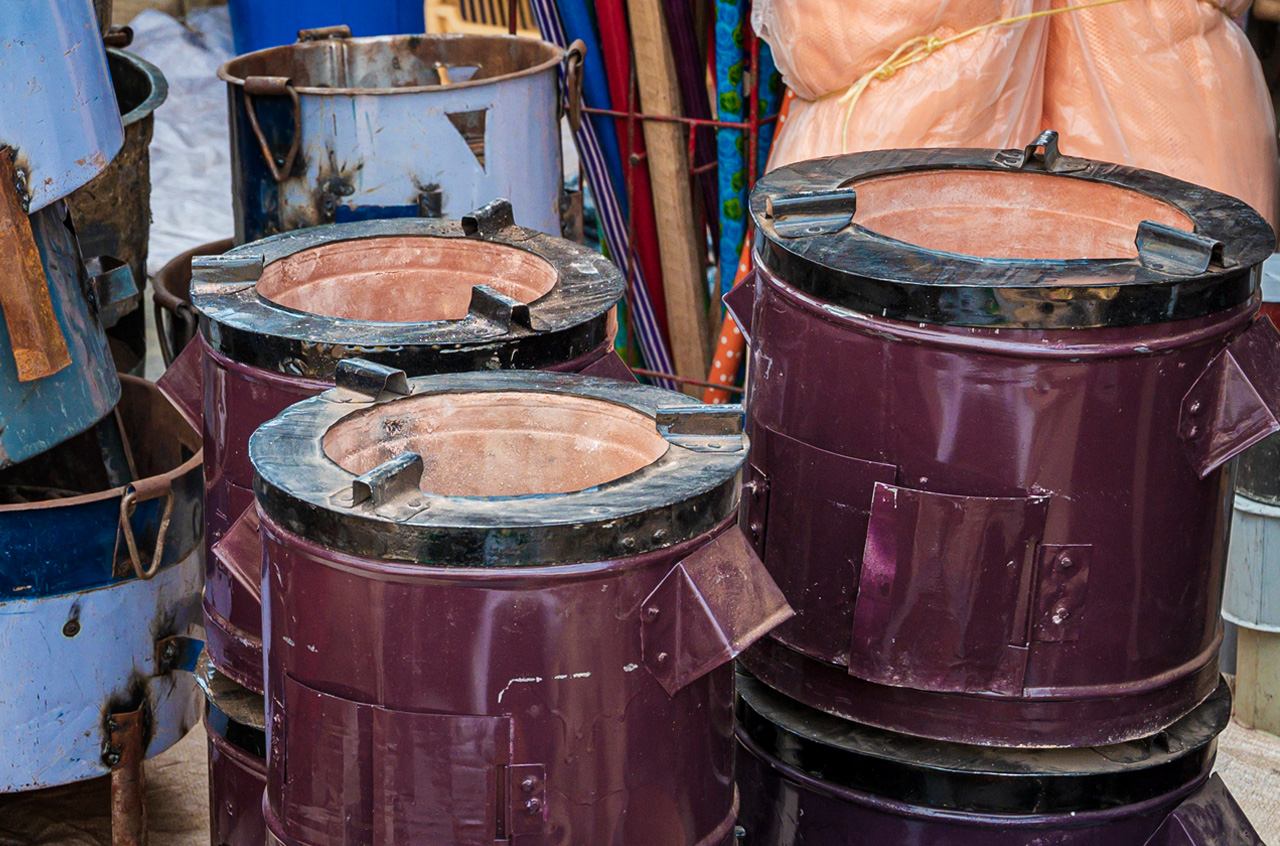 The cooking stoves are available in different sizes and cost between ten and 20 US dollars.

This is where the pieces of charcoal are layered later. The holes constantly allow fresh, oxygen-rich air into the combustion chamber, which ensures efficient, clean burning. 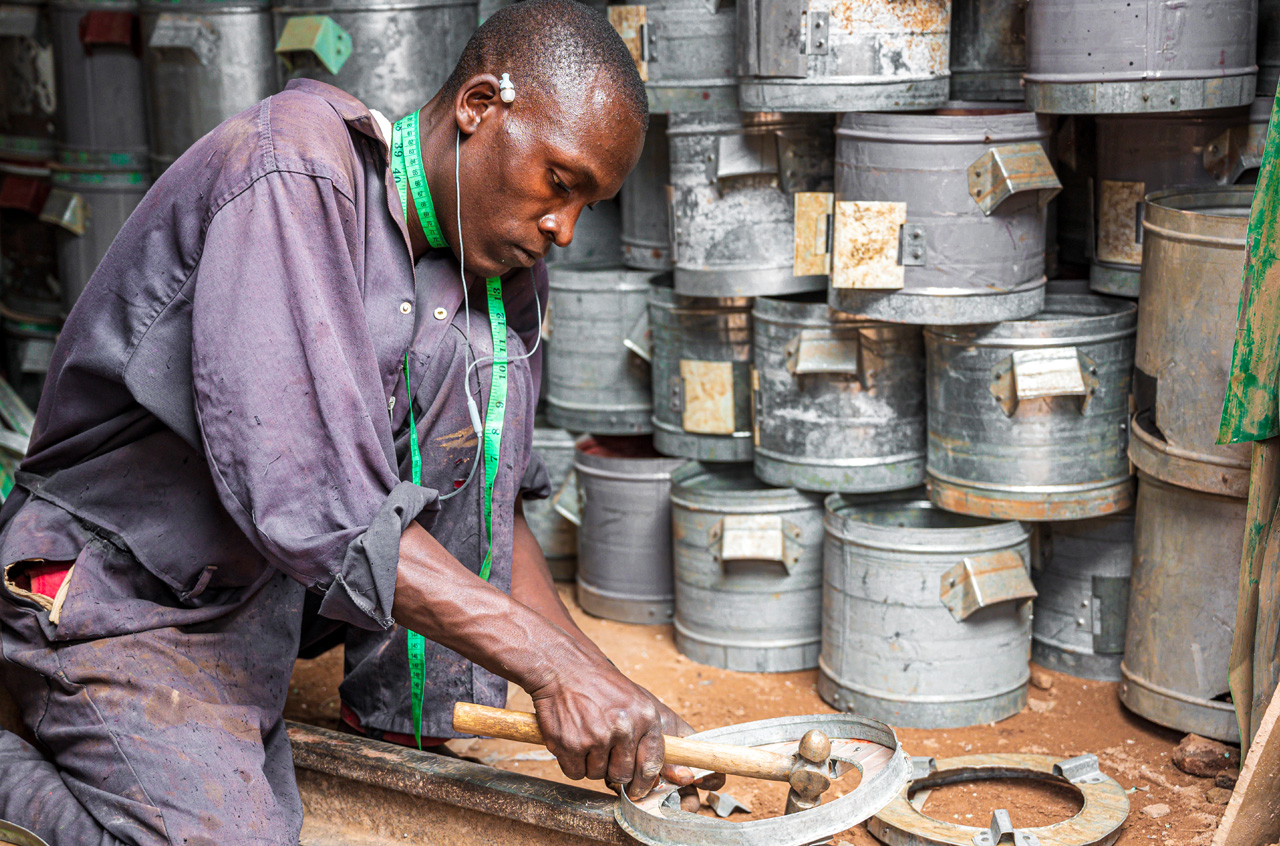 520000
cooking stoves
from the First Climate project are currently in use in and around Kampala. In 2019 alone, this generated CO2 savings of more than 500,000 tons.

Sarah Nabayego would like a stove like this for her household, too. Ms. Nabayego only cooks over an open fire in her hut. In her small restaurant, which she runs on the outskirts of Kampala, she uses three efficient stoves and so is aware of the pros and cons of each cooking method. "Cooking over an open fire consumes a lot of wood and makes a lot of smoke," she says, leaning on her improvised kitchen counter. "The smoke is dangerous for your lungs and eyes and causes constant headaches."

4.3 million people
die every year around the world from the smoke from open fires, according to the World Health Organization. There are some 20,000 such deaths in Uganda alone.

The project has potential

Depending on their size, the efficient stoves cost between ten and 20 US dollars and are therefore much more expensive than the traditional stoves. "But with a stove like this, a family can save up to 50 percent on fuel," explains Mr. Gassner. "This corresponds to some 100 US dollars per year." The initial costs are redeemed quickly. Through companies like FUCHS, which finance the project by purchasing certificates (see interview), the local manufacturers are able to improve their production and also invest in marketing. This increases demand, which in turn has a positive effect on the price.

It is clear to Gassner that the highly successful project has not yet reached its full potential by far, even after 14 years. "Uganda is relatively densely populated and has a high birth rate. In 30 years, the country will probably have around 100 million inhabitants," he explains. "You can imagine the impact this would have on the environment if cooking habits and wood consumption were to remain unchanged. That's why it is important to become more efficient – and we help with that."

9,000 certificates
have been purchased by FUCHS for the cooking stove project in Uganda. Each certificate represents one ton of CO₂ saved. Through the purchase of other certificates, FUCHS also supports environmental projects in Peru, Mexico, China, India, and Namibia. 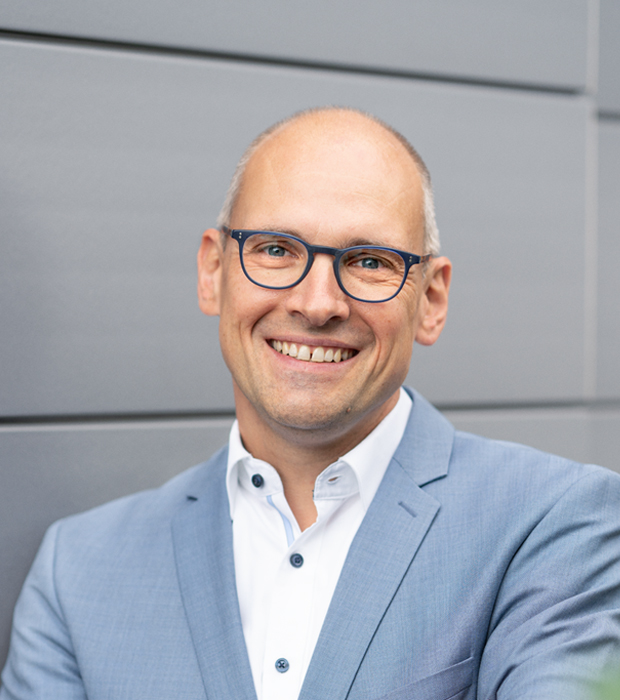 FUCHS has been operating with a carbon-neutral balance sheet at its sites around the world since January 2020. What exactly does that mean?

This means that we neutralize our carbon emissions within our own production for all sites worldwide – from energy consumption in production to consumables in administration or business travel. However, it is sometimes unavoidable for an industrial company such as ourselves to output CO₂. We offset these emissions through compensatory measures: We invest in climate protection projects that support economic, environmental, and social development in regions with FUCHS sites. The cooking stove project in Uganda is a good example of this. Incidentally, this is completely voluntary, as sustainability is a central corporate value for us.

How does this offsetting business work?

According to the principle of carbon offsetting, greenhouse gases generated in one part of the world are saved through climate protection projects in another part of the world. The initiators of these projects, such as First Climate, receive carbon credits for their involvement, which they then sell to companies like FUCHS in the form of climate protection certificates.

Why is FUCHS currently investing in the cooking stove project?

Because as a Gold Standard project, it not only reduces the output of CO₂ but also meets many of the 17 sustainability targets of the United Nations. It has exceptionally large benefits for people and the environment. Here's just one example: The WHO estimates that 20,000 Ugandans die from poisonous gases from open fires each year. If you like, that's 20,000 reasons for supporting the project. Plus, the stoves are produced locally, which means that we are supporting the local economy and securing people's jobs and income.

Is there anything that particularly impresses you about this project?

What impresses me is how such an enormous impact can be created with such simple means. It's not about high-tech in this case, but very simple technology. Of course, there are more modern alternatives to the cooking stoves which undoubtedly have an even better carbon footprint. What is important though, is that this solution is actually accepted by large swathes of the population. It fits in well with people's day-to-day lives and is also affordable within the scope of the project. The positive side effects for health and bank balance are immediately apparent for the individual. In my view, this makes the cooking stoves a real success.

Which objectives is FUCHS pursuing in terms of carbon neutrality in the long term?

In the long term, we of course want to sell our customers original carbon-neutral products. That's why we are working with our suppliers to encourage them to provide us with carbon-neutral or at least low-carbon raw materials. After all, it is the raw materials that are responsible for around 90 percent of the carbon footprint of the finished lubricant. I am confident that we will be able to achieve this, too.

What makes a product environmentally friendly?

It's not just a good carbon footprint that counts when it comes to the environmentally friendliness of a product. FUCHS and BASF have proven this in a…

Ecological vision: Along the entire supply chain Sustainability and environmental friendliness are of great importance at FUCHS. In our own production…

FUCHS LUBRITECH has received the EU Ecolabel for its release agents and greases.