One thing is absolutely indispensable: vision

Following 90 years of rich company history, FUCHS is now entering a new phase of development. The Group is moving forward with full force into the digital and global future. Two generations of Executive Board Chairmen, Dr. Manfred Fuchs and his son Stefan Fuchs, discuss the keys to their family business, where it is rooted, and the plans to take it into the future.

Springtime scents fill the air. In Mannheim, the sun is shining softly on the Friesenheim Island between the industrial port and the River Rhine. Sails flap in the wind, hitting against masts and drawing the eye toward the headquarters of FUCHS PETROLUB SE. The humble enterprise that would become today's multinational company was entered in the commercial register almost exactly 90 years ago on May 30, 1931. The company's headquarters have actually been located near the banks of the Rhine in Mannheim since the end of the 1930s. It was from here that the many steps on the road to becoming a global corporate group were taken – initiated by company founder Rudolf Fuchs and continued both by his son Dr. Manfred Fuchs and today his grandson, Stefan Fuchs. A global corporate group, yes, but also still a family business that essentially works to the same principles today as back then: trust, integrity, reliability, and proximity to the customer.

Stefan Fuchs was appointed Chairman of the Executive Board in 2004, taking over from his father, Dr. Manfred Fuchs. In 2017, his father then also retired from the Supervisory Board, although he still makes his way to the FUCHS Family Office every day and maintains contact with his son. This crisp spring morning is no exception, and he is chatting with his son about the exciting times the company has seen over three generations, as well as what the future might hold.

90 years of company history are the occasion for Dr. Manfred Fuchs and his son Stefan to look together into the past and into the future. 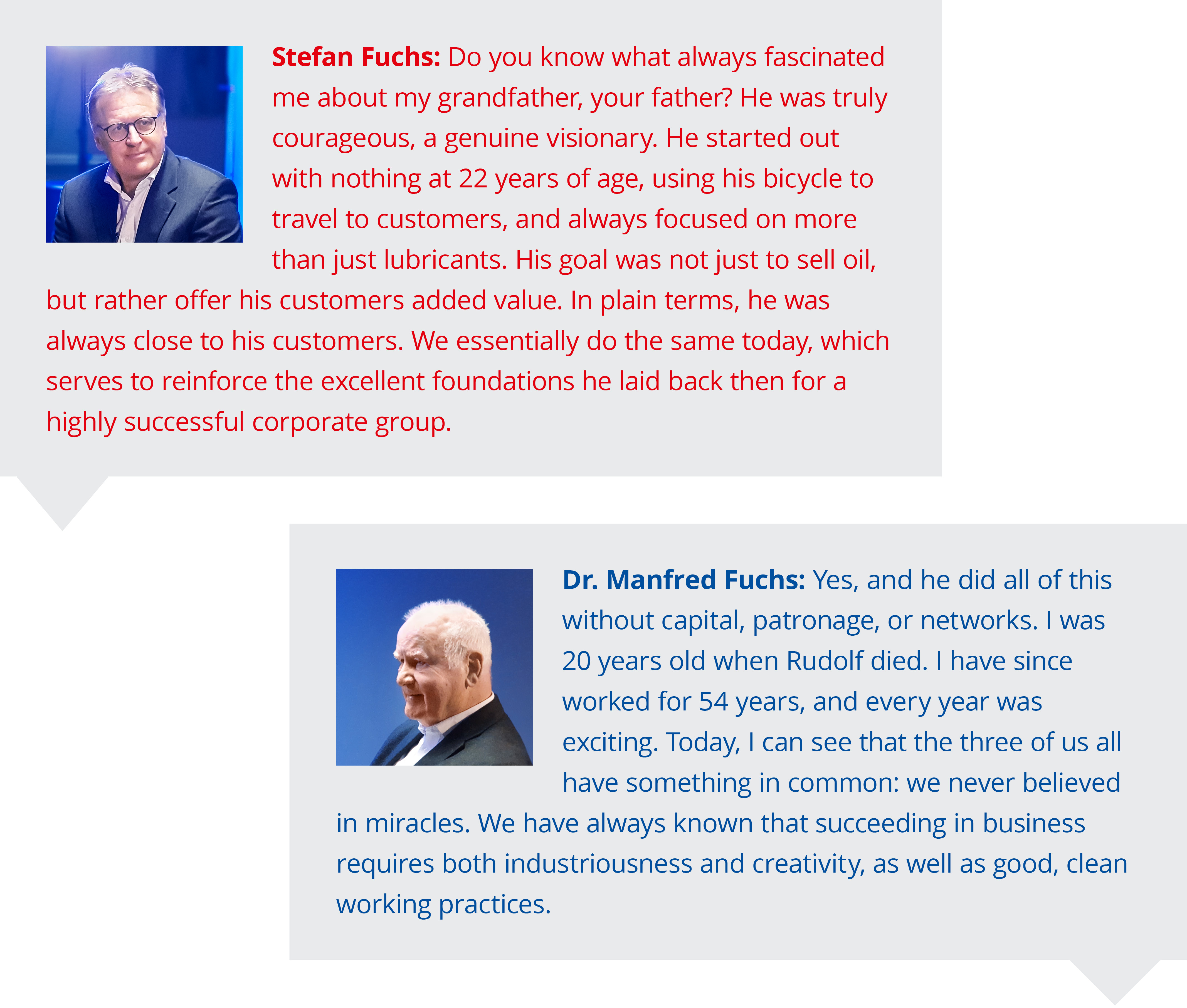 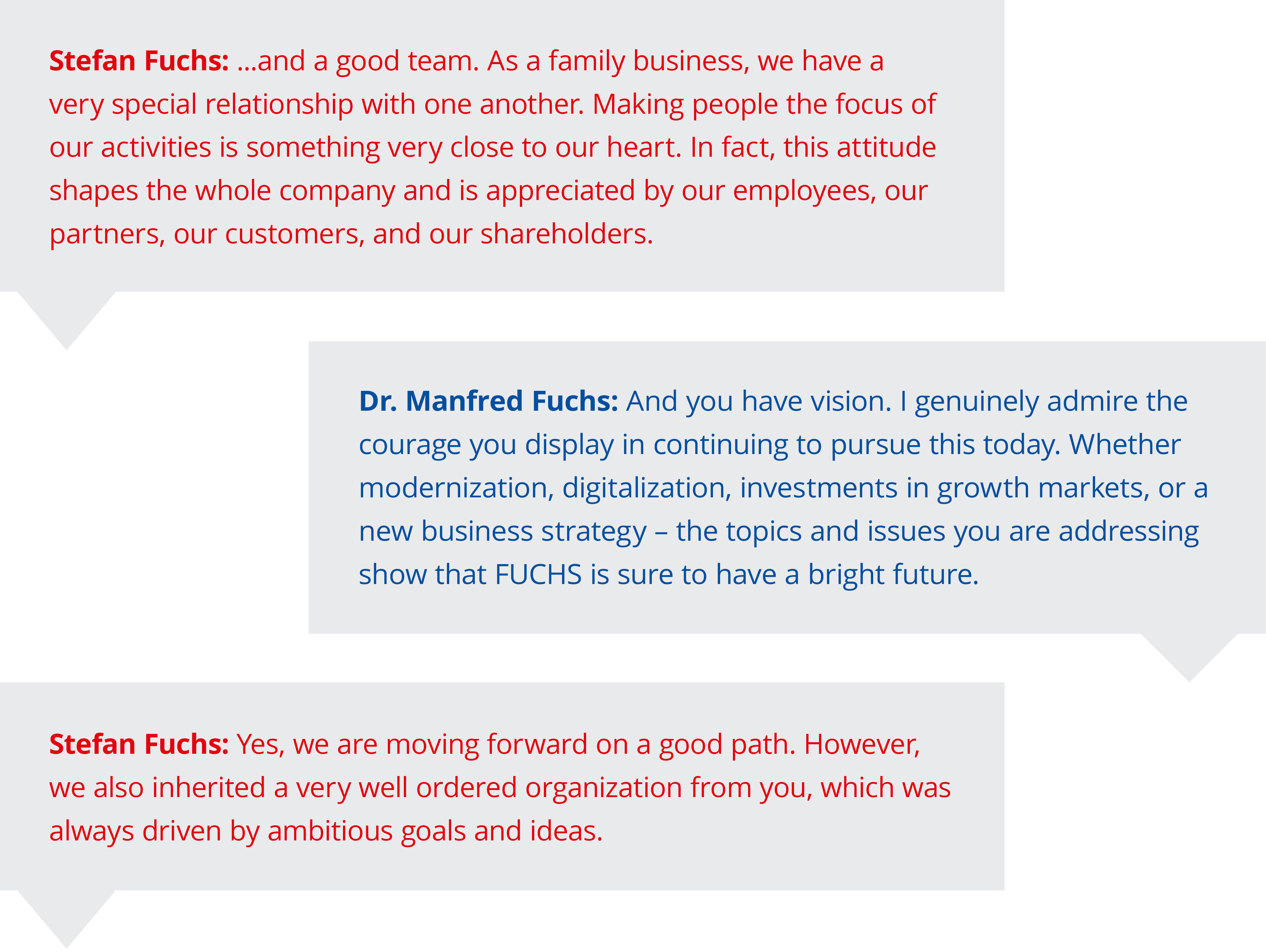 Manfred Fuchs appears quite moved by the words. His eyes are wide open and focused on his son as he speaks. When he then talks about the early days and his own vision of FUCHS becoming a global player, his passion and ideas are clear to see in his lively hand gestures. His father Rudolf was already active in the neighboring markets in Europe, as well as in the Middle East. Establishment of the single European market then led to expansion in Western Europe. Acquisitions were also made both in the US and the Asia-Pacific region, as well as in Eastern Europe after 1990. FUCHS entered the Chinese market in 1985 – an important year for the family business, as it also went public at the same time. Yet this decision never threatened the company's independence, as the Fuchs family continues to hold the majority of the capital stock with voting rights to this day. This is not the only way in which FUCHS displays continuity. 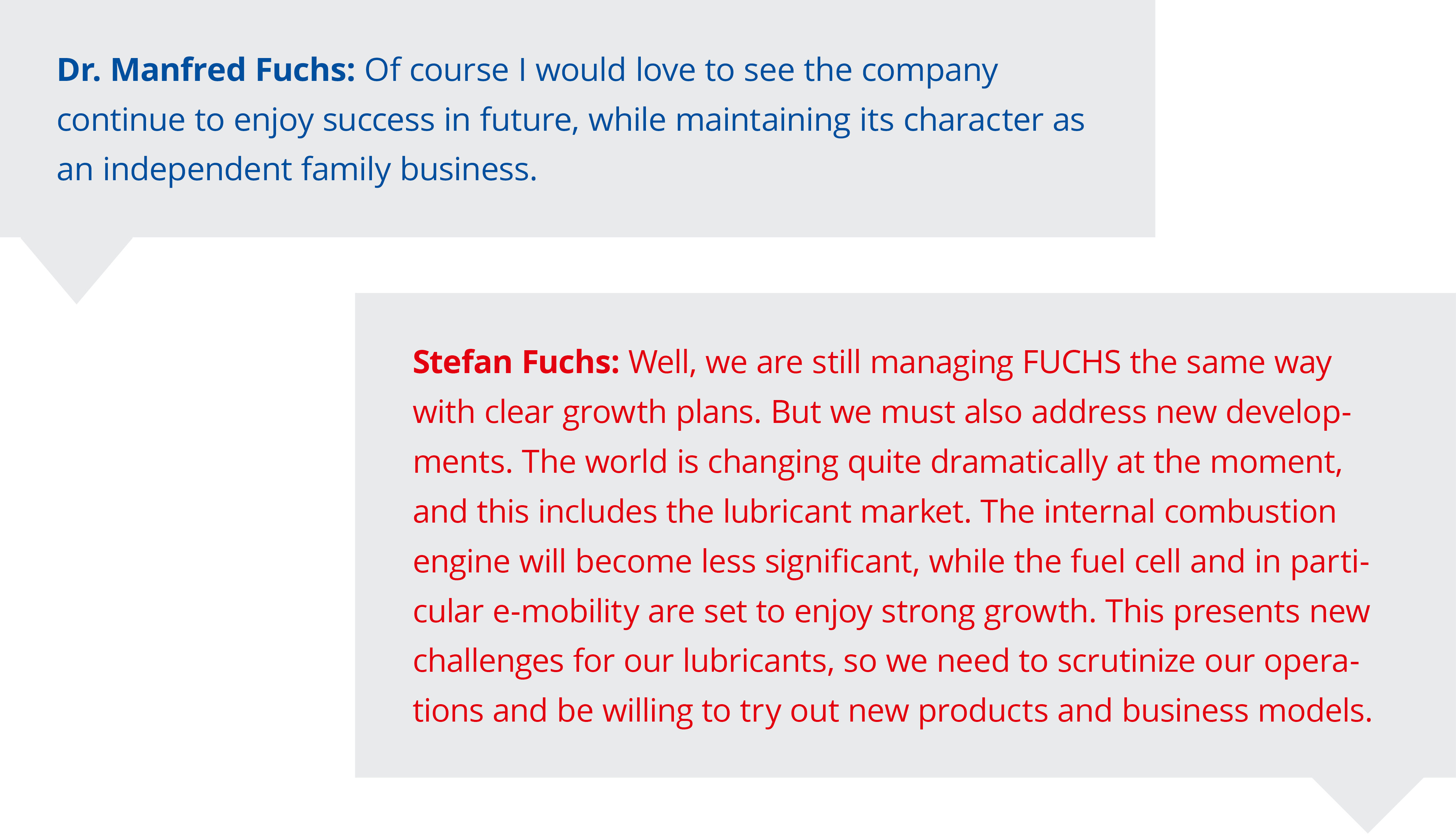 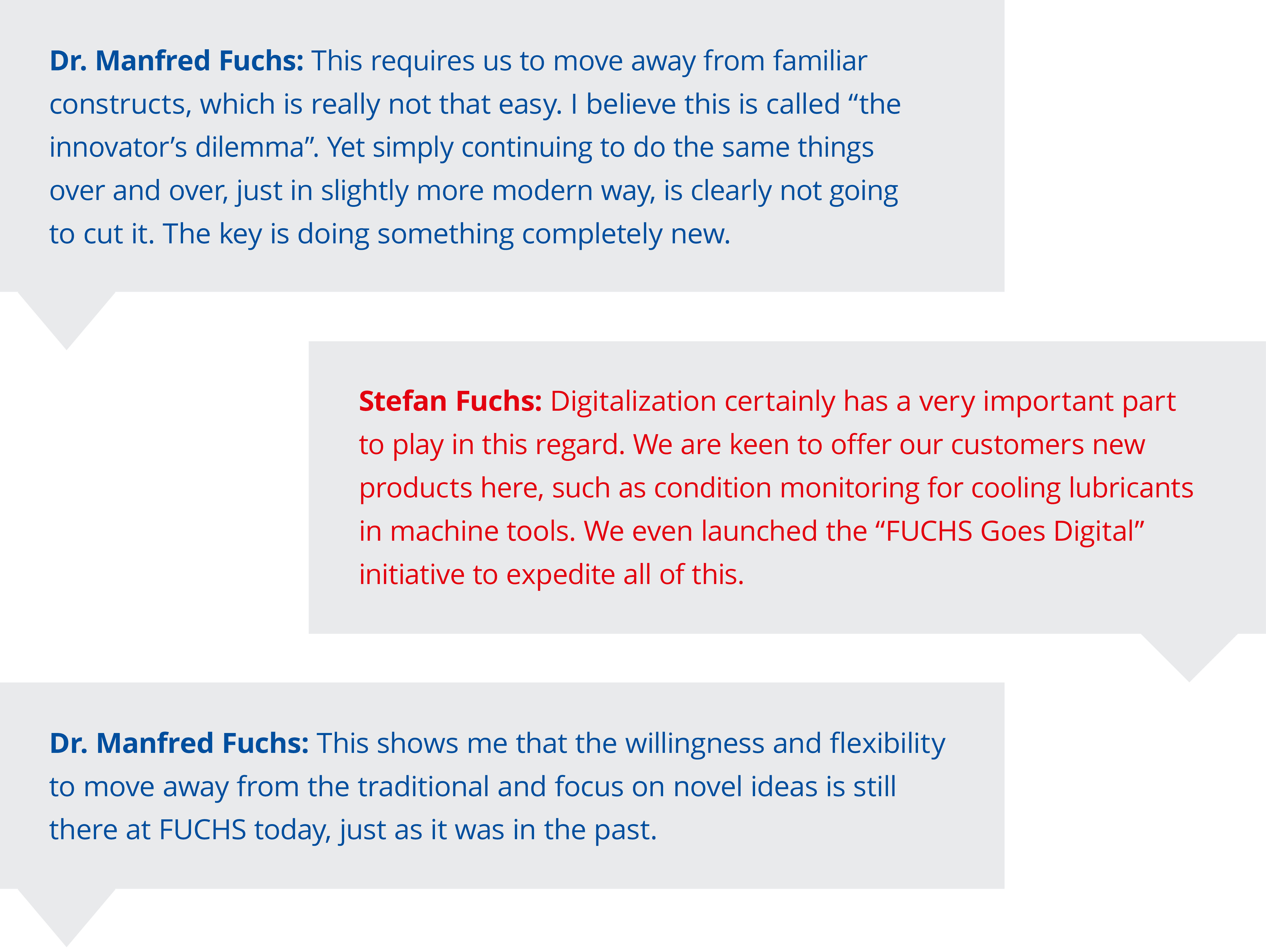 Digitalization is perhaps the best example of this. New digital opportunities have helped establish international networks within the company – allowing everyone to communicate with everyone else across the globe. The communication basis created in this way has also led to a permanent dialog that itself helps expedite new developments. This is one of the cornerstones that FUCHS developed for its new FUCHS2025 business strategy. The new breakdown of the markets is also an important point here.

If you would like to learn more about the history of FUCHS, we will take you on a journey through time here. 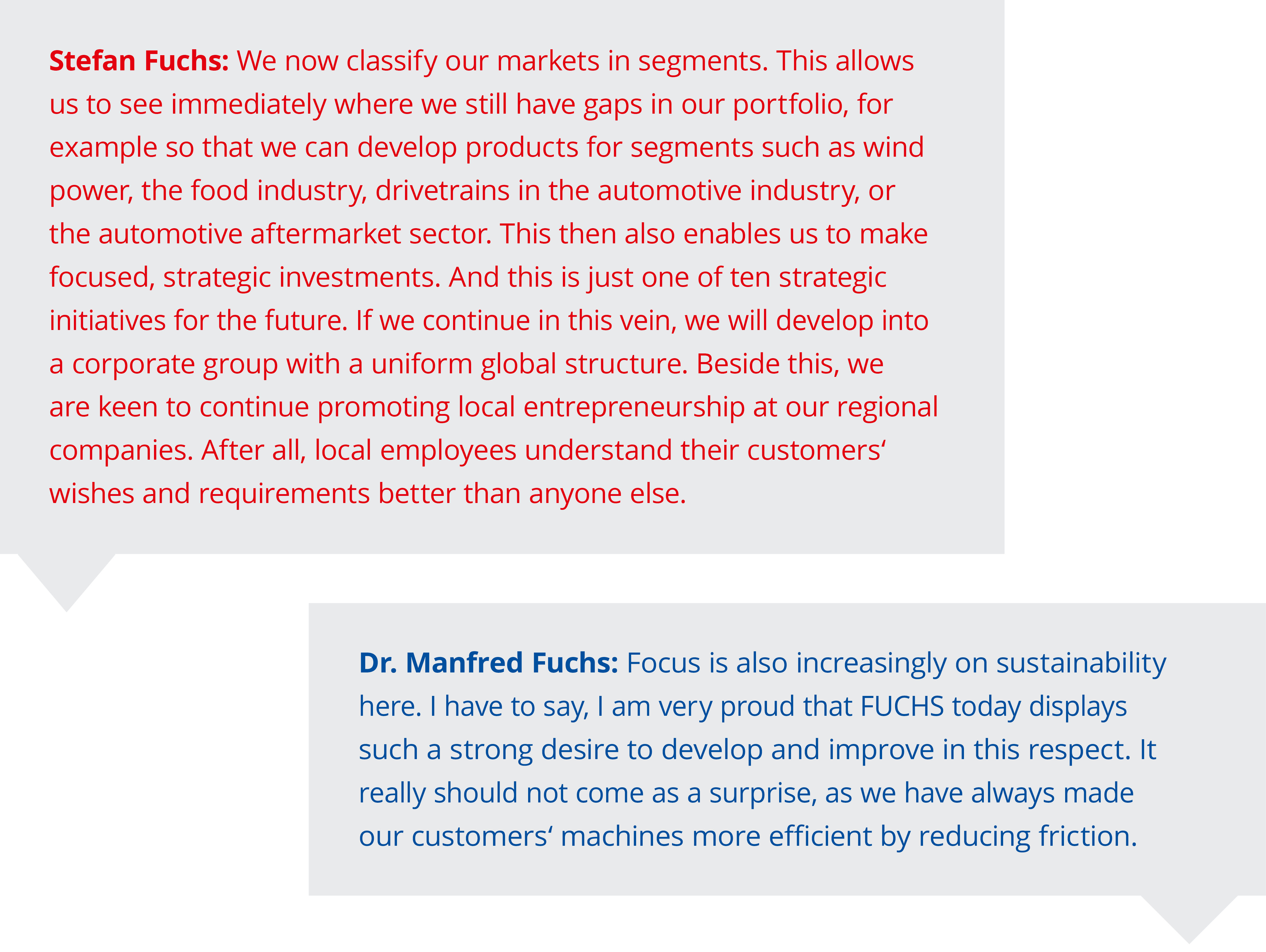 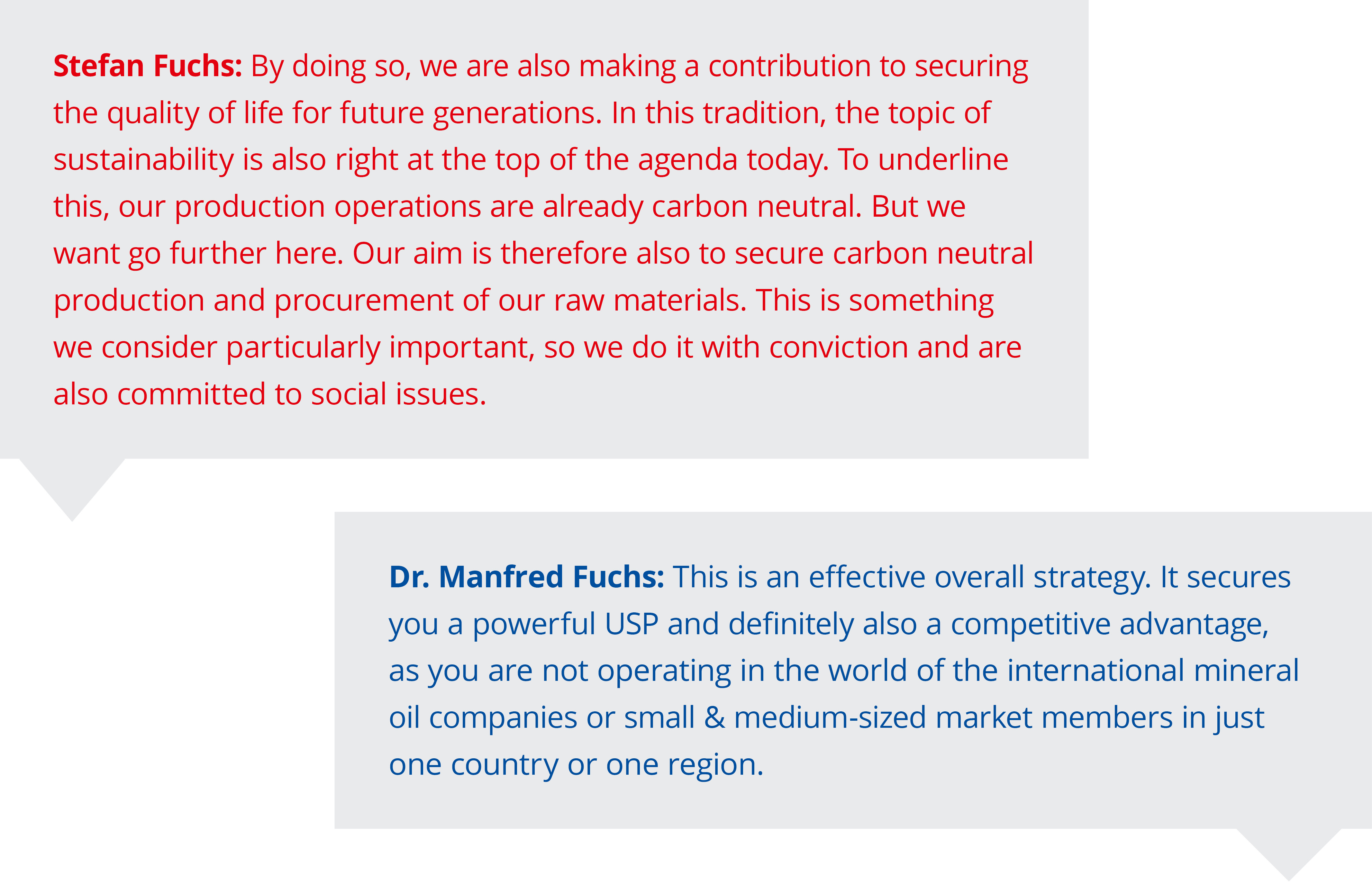 FUCHS has therefore found an excellent blueprint for growth in further countries and regions. The next steps have already been planned – in the right locations for new visions.